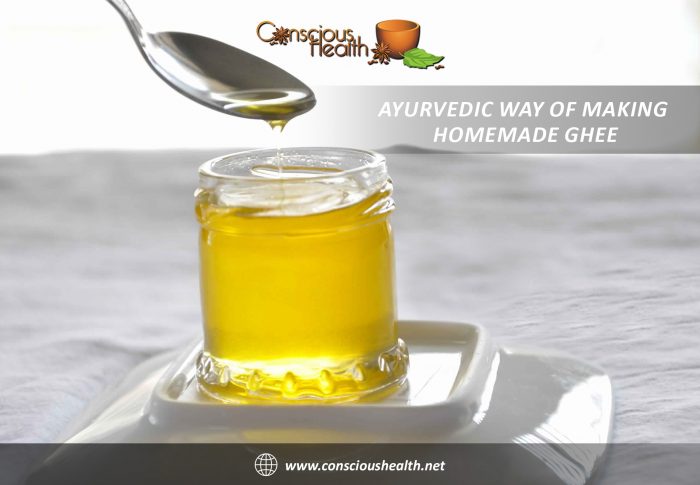 I smell the most aromatic flavours when spices sizzle and dance in ghee. I feel the warmth in the kitchen and my mouth waters instantly just by the smell of heated ghee. For me ghee is an elixir and the ultimate brain food. This is the quintessential source of vegetarian fat that is used in South East Asian cooking. It is extremely popular in Ayurveda as a medicine itself and also as a medium to deliver medicine in your body.

While growing up we did not like the fat in our milk. So what my mother used to do was save all the cream and fat from the milk. She had a container full of cream and fat in the freezer that she would top up every day. One day I saw what she was doing and asked her what was she up to? She told me, Nahid dear, I will be making homemade butter and ghee. And I was super surprised and excited. I loved ghee! Just didn’t know you could make it from the discarded fat of the milk. Hmmm….

How butter is made:

A milkman would deliver fresh whole milk early in the morning, from the cows he raised. Oh yea! As young children we indeed had the luxury of drinking raw unpasteurized milk. My mother only made sure the milk was warm before she gave it to us. We never liked the fat or cream on top of our milk, so we used to scoop it out. After that my mother started collecting the cream and soon was able to accumulate a big bowl of it, since we had milk delivered almost every day. She stored the cream in the freezer.

If you are interested in making ghee this way all you have to do is separate the cream from the milk. This is easy because the cream portion of the milk is lighter than the liquid part of the milk and would always rise on the top. When you leave the milk on your counter top for an hour or so, you will see the cream rising to the top.

Once my mother collected enough cream, she would then defrost her frozen cream, add water to it and churn. The churning made it thicker and turned into a homemade butter.  All she had to do now was to squeeze out excess water from the butter before suing it to make ghee. YUM!

The kitchen smelled like festive room that was filled with aroma, flavour and crazy deliciousness, when my mother started melting butter over low heat for a long period of 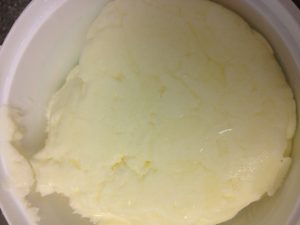 time. All I could think of, at the time was when will she make Biryani (traditional rice & meat dish) from it? Once the butter started to melt she would wait until she could see bubbles that indicated that water was evaporated and the milk solids would separate from this golden, rich liquid. She would then strain the liquid and store the ghee in a glass jar.

I will share a rather easy recipe with you. You can make it at home using organic unsalted butter or use cultured butter (if you can find it) for best ghee ever! If you have the patience you try it at least once to make it like my mother and collect the cream from whole milk. It takes about a week or two to accumulate cream from milk. I called my mother and she said she used to get 4 cups of cream for 2 litres of milk (approximately). If you want to make it using a quicker method than buy organic butter and follow the recipe below – for an easy make.

If you are in Mississauga or Toronto  then you can easily get homemade ghee from Conscious Health. Click here to check it out. Keep an eye on my future posts for recipes that include ghee and benefits of ghee.