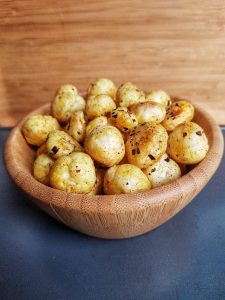 Do you want a new healthy snack idea that’s tasty and low carb? I’m going to introduce you to Makhanas, also known as Phool Makhana or fox nuts or Gorgon Nuts (in Chinese Medicine). They aren’t actually new – they’ve been used since ancient times especially in East Asia. They come from the prickly water lily plant and have been cultivated since ancient times in Asia especially China, India, Japan, Vietnam, Thailand and Korea. India (specifically Bihar state) produces 90% of the world’s supply. They are starchy seeds eaten raw, roasted, or fried.

Makhana – is making a comeback in the health food scene, globally. An Ayurvedic favoured snack that is Pitta and Vata Dosha friendly is not being popularized as a keto friendly or low carb snack.

In Ayurveda Makhanas are used for vigor, fertility, stamina, improvement of the sperm count, and are considered an aphrodisiac. Makhanas are also used to reduce diarrhea and improve digestion. Makhanas also have cardiovascular benefits. Due to being low carb, Makhanas are favoured for diabetic patients.

Makhanas have a lot of nutrients. They have protein and essential amino acids, as well as fibre. Per 100 grams of Makhana contains 100 micrograms of folate, 2236 mg of Iron, 2397 mg of phosphorus, 66 mg of zinc and 14.52% of protein. They also contain B vitamins (especially B1), potassium, manganese, magnesium, and calcium. Additionally, makhanas have polyphenols and flavonoids that are antioxidants and provide many health benefits.

In addition to the nutrients you get while eating the whole seed, various extracts have been studied for their health benefits. Polysaccharides extracted from Makhanas have shown to reduce body weight and blood glucose in animal studies, as well as acted as antioxidants and increased the body’s own antioxidants SOD (superoxide dismutase), CAT (catalase) and glutathione. Another study found that the Makhana is high in polyphenols, which decreased weight and lipid/fat deposition on the liver and protected the liver. Another substance found in Makhana improves glucose metabolism, reduce insulin resistance and improves glycemic control.

It is said in Ayurveda, when taken along with milk, Makhanas, can improve sperm count, sperm motility, treat premature ejaculation and increase stamina in men. Men can take Makhanas along with other Ayurvedic herbs such as, Ashwagandha, Bala, Cinnamon and Shilajit.

Makhanas provide energy to pregnant women and acts as a galactagogue for lactating mothers.

Where to Buy Makhanas?

In North America (USA or Canada) you can find Foxnuts on Amazon. I would say you can just as easily find Makhanas at any Indian grocery stores at much reasonable price.

I love eating Makhanas as a snack. With ghee and spices it becomes the most wonderful snack! I hope this inspires you to try this snack!

Benefits of Moongpani in Ayurveda and Yogic Practice