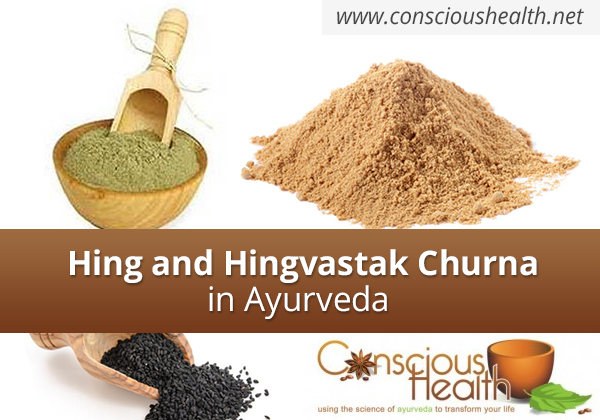 Hing or Asafoetida and Hingvastak Churna in Ayurveda

My story: My first introduction to this amazing spice was through a Bengali TV drama – when a lady was cooking something with beans and was looking for Hing to add to the recipe. I wondered how is it that I never heard of this spice? Later I was told that hing was not a part of our home kitchen (when I was growing up) because traditionally we used more fennel and cumin as a digestive remedy than hing – due to the fact that hing has an extremely strong smell that can take over the entire spice cabinet.

Today, I make my own Hingvastak blend. The hing or hingvastak available in the stores are either mixed with wheat or yeast when you get them at the Indian grocery stores. The few organic brands I have tried have more cumin or ginger than hing.

This is an amazing spice for cooking lentils, beans and vegetables from the brassica family. My vegetarian clients love this hingvastak because of their high intake of beans and lentils. They feel less bloated and gassy when they cook with hingvastak that I have prepared.

I have used this for clients who have had trouble conceiving – this is done by asking them to add hing when they are cooking beans and lentils as well as drink hingvastak as tea when they are experiencing digestive problems.

Hing or hingu or asafoetida is an ancient Indian spice widely used in cooking and for home remedies due to its therapeutic actions.

Hing (or asafoetida), is an oleoresin native to India. Oleoresins are semi-solid extracts composed of a resin in solution in essential and/or fatty oil, obtained by evaporation of the solvent used for their production. Asafoetida is the dried latex or gum oleoresin exuded from the rhizome or tap root of several species of Ferula, a perennial herb that is native to India, Iran, and Afghanistan.

Effect of Tri Dosha: Suitable for Kapha and Vata Dosha because it controls excess mucus and wind. However, hing is too heating for Pitta dosha individuals.

Dosage: For cooking use a pinch to ¼ teaspoon and for medicinal or for therapeutic usage take as per advised by your Ayurvedic Counselor or Doctor.

Digestive Benefits: Hing is one of the best spices to treat Vata digestive disorders by increasing ‘agni’ or the ‘digestive fire’. It is used for flatulence (expulsion of gas from stomach as well as eases retention of wind/gas), indigestion, bloating, reduce bloating, colic pain and reduces digestive stagnation. In Ayurveda disease process starts when Ama or toxins are accumulating in the body; hing reduces toxins in the body.

Effect on Candida or Yeast: In Ayurveda hing is also used to balance the gut flora that can be affected by overgrowth of candida.

Effects on Parasites/Worms: Hing can also reduce worms and parasites from the intestine. Hing also has anti-viral properties.

Female Reproductive Health Benefit: It is helpful when experiencing menstrual cramps/ dysmenorrhea which is usually associated with blocked flow of Vata dosha. According to Ayurveda, “hing immediately enters the arthva srotas via rasa dhatu, which has a powerful impact on menstruation.”

It regulates the menstrual cycle and reduces uterine spasms – conditions that occur due to high Kapha (stagnation in circulation). It treats low libido, impotence and encourages ovulation and fertility in women (congested Kapha condition).

Asafoetida or hing has known to clear leucorrhea (Discharge of white mucous material from the vagina; often an indication of infection)

Asafoetida is also known to assist mothers after delivery of the child by expelling toxins and cleaning the womb. It also reduces pain after delivery.

In some part of the world Asafoetida or hing has been used as a contraceptive by women due to its heating nature.

Contraindications: Hing is highly pitta aggravating and can worsen gastritis. It should only be used in specific instances to pacify kapha and vata dosha conditions. If consumed by pitta dosha individuals, it can overheat the physiology and act as a tamasic agent. It will trigger tamasic sexual energy when consumed needlessly.

Hing cannot be used during pregnancy due to the fact that it can cause abortion. Therefore, after conceiving stop the use of hing and also avoid when lactating.

Avoid during menstrual cycle, only use before or in between cycle. If experiencing cramps during the cycle I suggest taking cinnamon tea (hot water with ¼ teaspoon of cinnamon)

Intake of hing is not permitted in bleeding disorder as it is a blood thinner.

Hing is – Asafoetida, which is the main ingredient of this blend. Ashta means eight (8) – which means the blend contains a total of eight herbs  or spices. Churna means powder.

How to ingest Hingvastak Churna:

Hing can be taken as tea, used in cooking or with ghee. Powder or capsules are also available at health food stores.

Leave a comment if you had used Hing or Hingvastak.